You need a pass to be here!

Today was one of those quiet office days – reinstalling OSX on an old G4 that I’m offloading, scanning some transparencies, organising a lighting rental for a shoot next week, sending a camera and lens off to be serviced, kind-of completing my VAT return, etc. However, whilst rummaging through one of my filing cabinets I came across some old Press pass credentials. On the whole photographers are given loads of these, usually for no discernible reason, and nearly all get thrown away. But this one I kept, as it always struck me as ironic…a press pass to Omaha Beach. 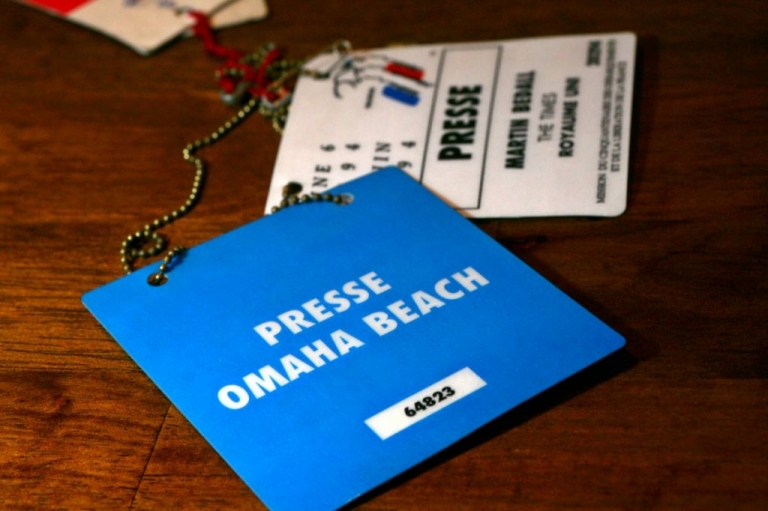 I was part of the team of photographers from The Times, covering the 50th Anniversary commemorations of D-Day in Normandy in 1994. On the whole we were covering the British events – the parachute jump at Pegasus Bridge, veterans and the Queen at Bayeux cemetery and parades on Arromanches beach. Film was developed in the toilets of a local school with had become the press centre for Fleets Street’s snappers. But one day I was despatched down the coast to Omaha Beach to cover the big event with all the Heads of State and half the world’s navies parading out at sea in the background. Having to find my own way there, and my appalling French meaning I thoroughly confused, if not alarmed, a gendarme by asking for the way to the rail station but actually, I was told by a smirking journo nearby, asking for ‘the way to the war ‘! ( gare, guerre) The highlight turned out to be this pass. Robert Capa may have braved the bullets, got incredible shots, gained the fame, become an immortal in photojournalism but he never had a bright blue press pass saying ” Presse Omaha Beach”! 🙂