Location for one of the most pivotal moments in the battle of Waterloo, almost exactly two hundred years ago. A famous moment in British military history. The closing of the North Gate, against the French attackers, was described by the Allied commander, the Duke of Wellington, as ‘deciding the outcome of the battle’. 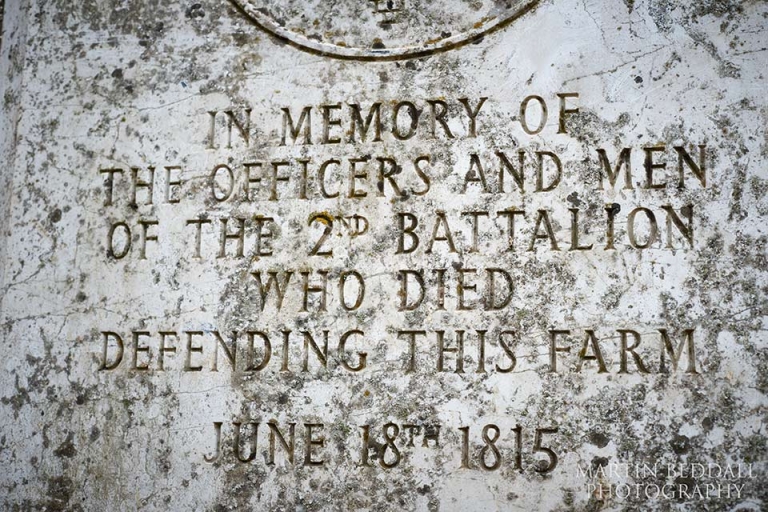 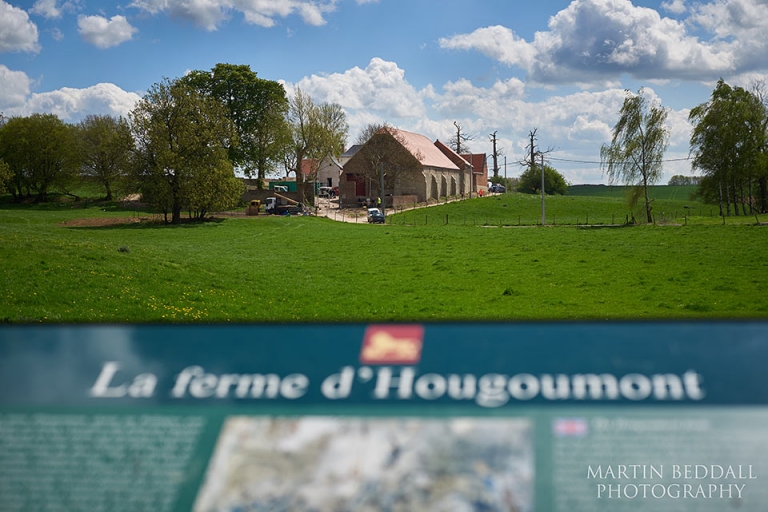 Around thirty to forty French infantrymen had burst through the gates, after they were forced by Sous-Lieutenant Legros, (L’Enforceur) with an axe. The gates were shut behind them and all the French troops were killed in fierce hand-to-hand fighting, except for a young drummer boy. It was immortalized in Robert Gibb’s painting, now hanging in Edinburgh Castle and with model figures on my office bookshelf!

So just over a week after creating that diorama with my son, here I was standing in the courtyard at Hougoumont, at one point chatting to a serving Coldstream Guards officer, watching these famous gates be restored.

Much of Hougoumont, including the chateau, burnt down during the battle after French bombardment. Many of the wounded died in the fires that spread around the complex. Over the years the site slowly decayed, despite being a working farm. Bought by the regional authority, plans were put in place to restore what was left of the ruined farm in time for the anniversary in June. An important element in the battle of Waterloo, but seldom visited by many tourists, hidden away by a wood and not that close to the tourism museum and mound. (More on that in the next post soon) Part of this restoration effort has come from Britain with the Project Hougoumont charity, with some money from the British Government. A feature of their remit was to restore these famous gates.

“Members of the Wyndham family have agreed to fund the replication of the famous North Gates and the repair of the gate piers in memory of their forbear, Lieutenant-Colonel Henry Wyndham, who played a leading part in the closing of the gates in 1815. The gates themselves will be made in the estate yard at Petworth, home of Lord Egremont, head of the Wyndham family. Fragments of the original gates and the lock preserved in the Guards Museum will be used to ensure the new gates resemble the originals as closely as possible.”

I attempted to photograph the construction of these gates, Petworth being down the road from me. I thought it could make a nice standalone photo for the broadsheets (if such things are still published). Good publicity for the forthcoming anniversary and interest in Hougoumont. Attempts to get access were blocked – and it seems the BBC was blocked too. I, like them, gave up on it. Even emails from the Belgian Press officers were not answered about when the gates were due to be hung. Although to be honest I didn’t see that as the photo – more a TV moment. All plans of a striking graphic shot of a joiner working on the gates were dashed.

I went to Waterloo anyhow. To see it ahead of the anniversary.

Having walked much of the battlefield, I headed down towards Hougoumont in the afternoon. Turning the corner I saw a group of workmen, talking English and tucking into their lunch from McDonalds, outside the North entrance. Here was a team from the Leconfield Estate in Petworth, who had brought over the oak gateposts, massive lintel and the gates themselves and were fixing them in place. What jammy timing! Lucky timing for the BBC too, who happened to be there to cover the Waterloo Uncovered archaeological dig taking place at Hougoumont (with some Coldstream Guards).

Back early the next day, to see what it would make, I spent the morning watching the gate come back to life. Solid English oak – they look impressive. They may well also be rather stronger than the original gates. Maybe these North Gates would have thwarted Lt Legros and his axe? 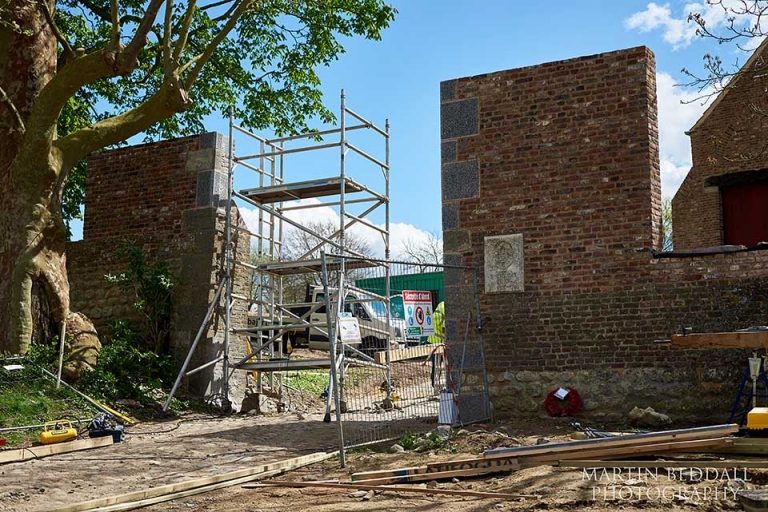 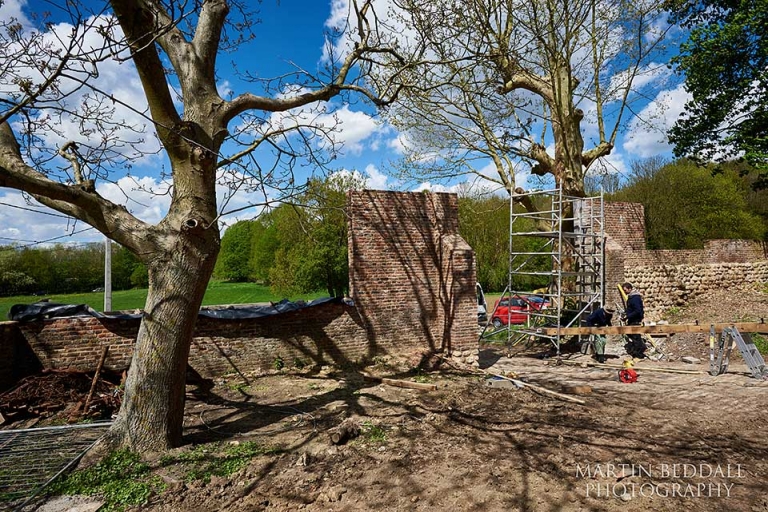 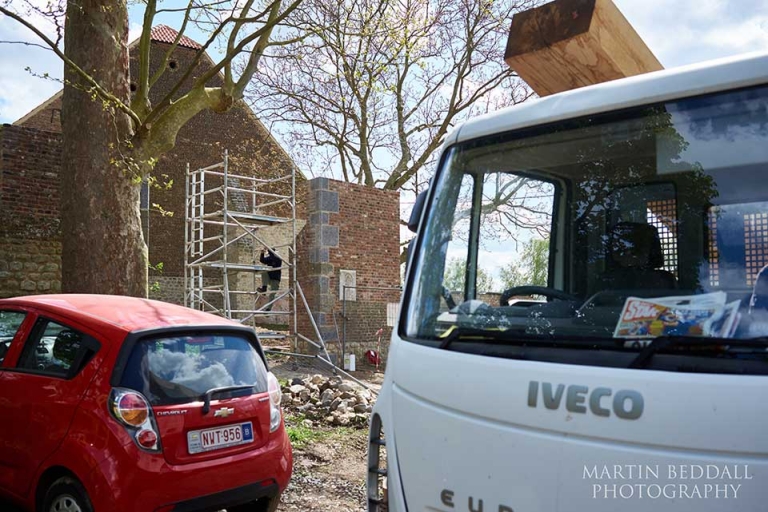 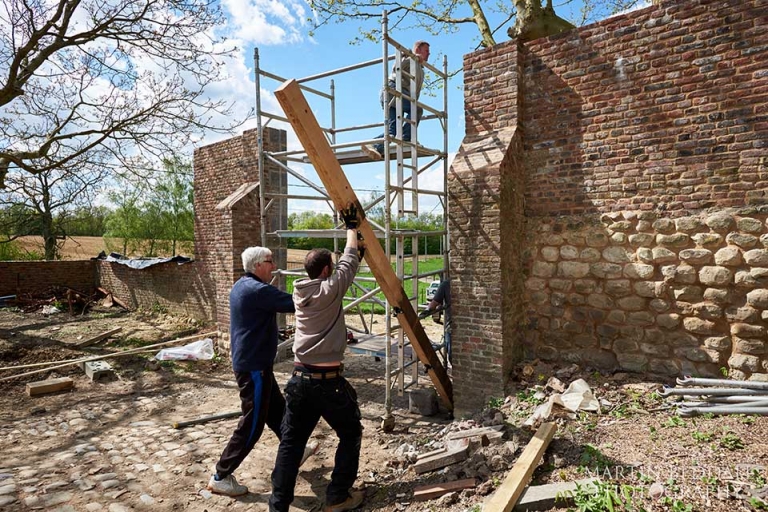 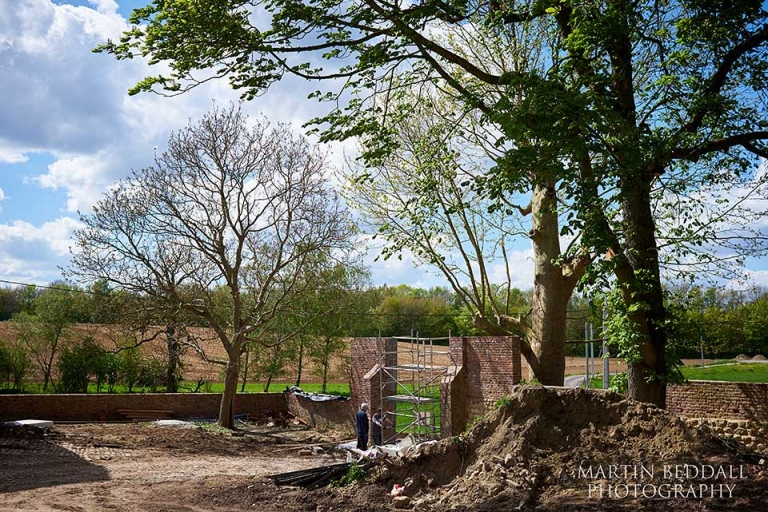 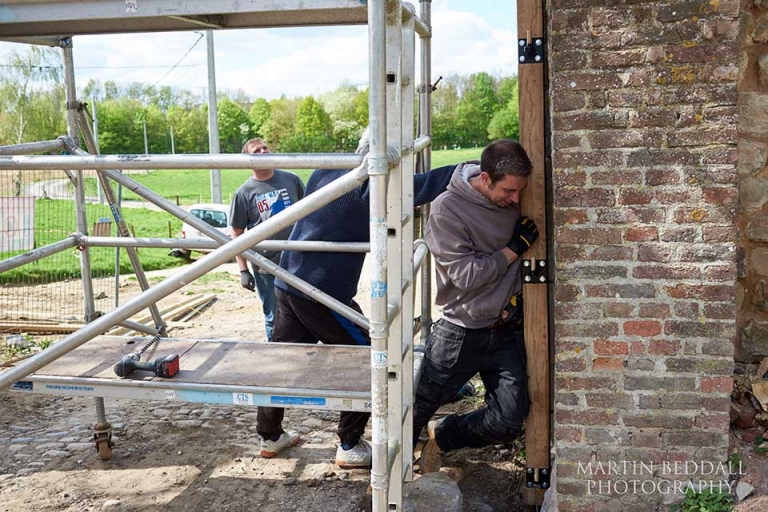 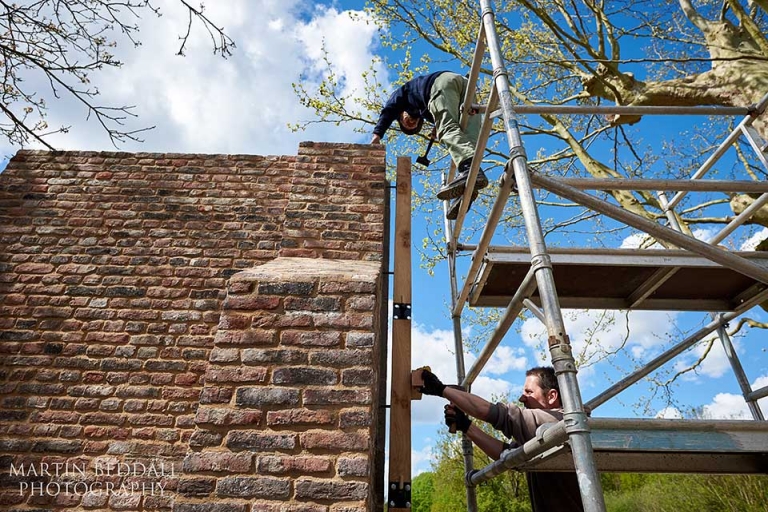 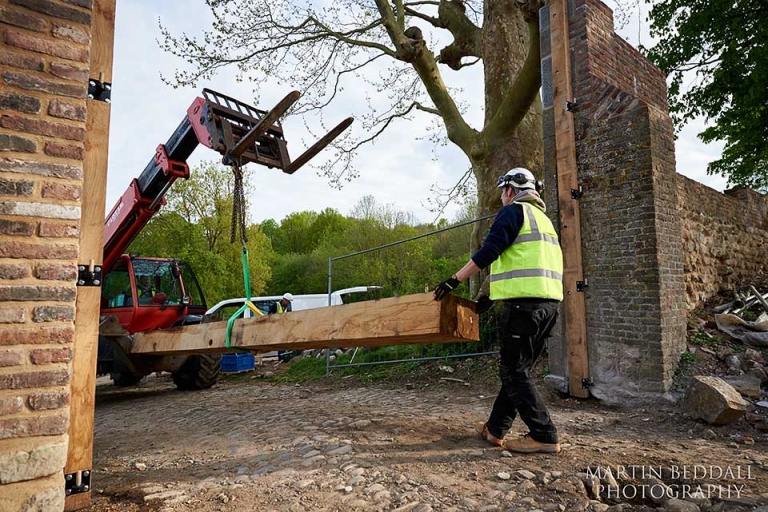 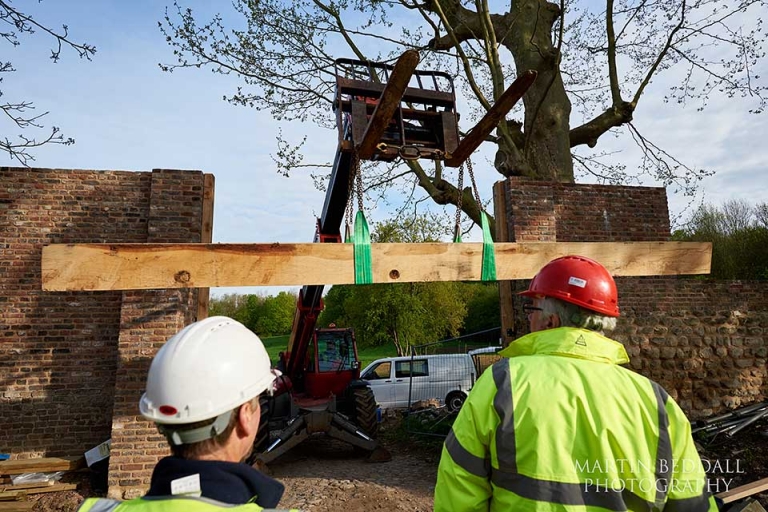 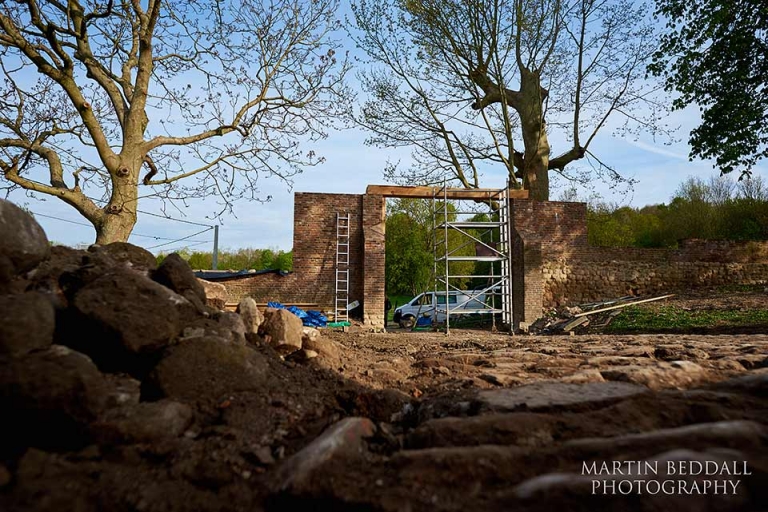 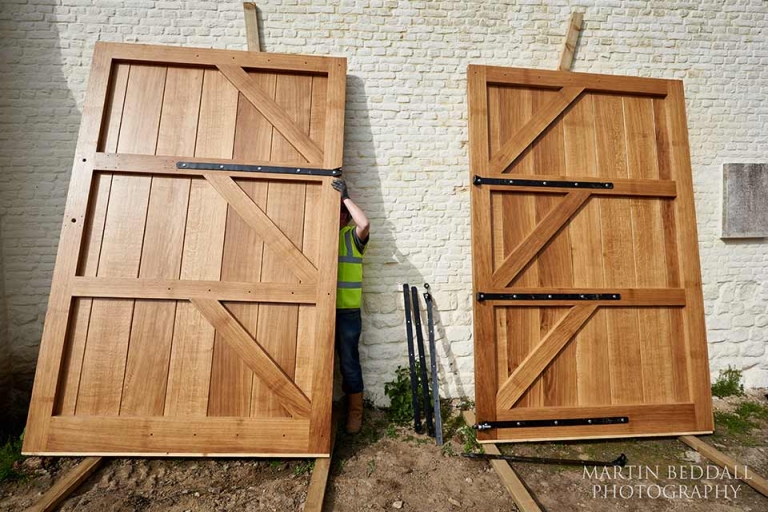 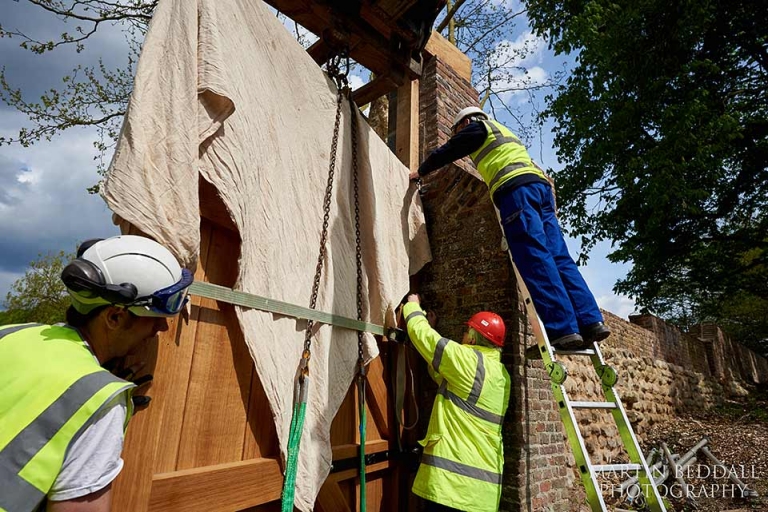 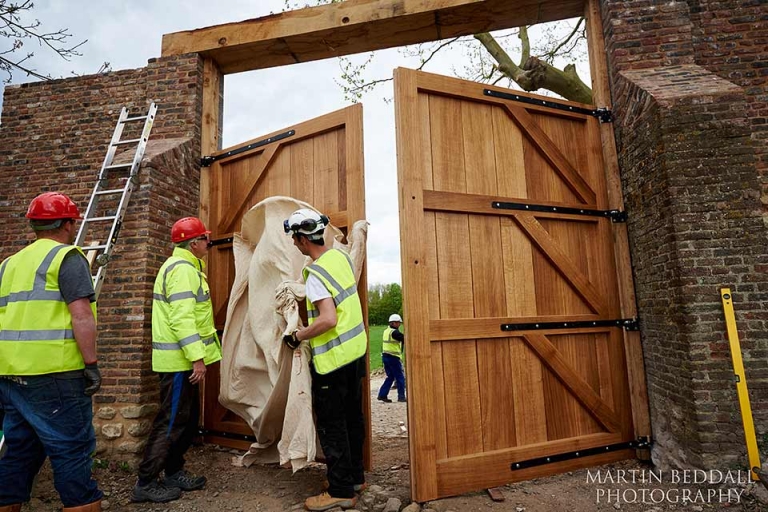 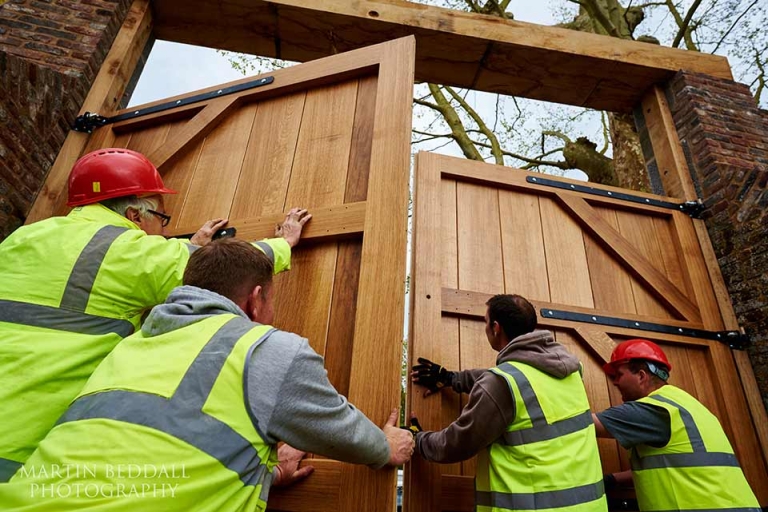 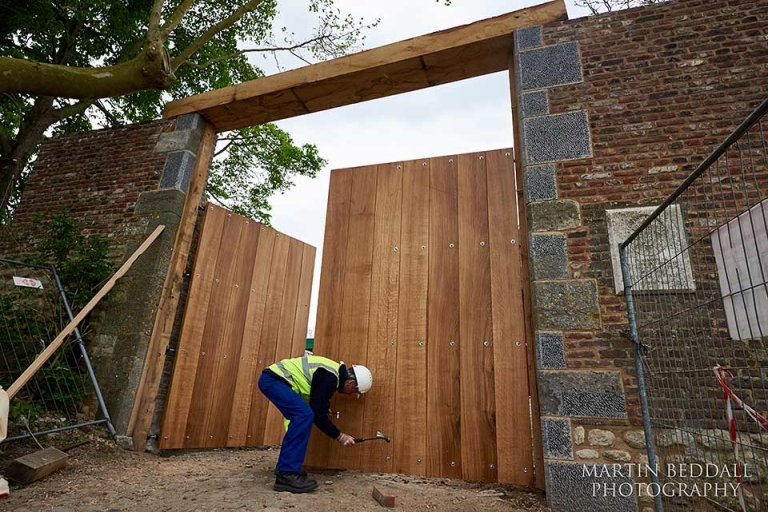 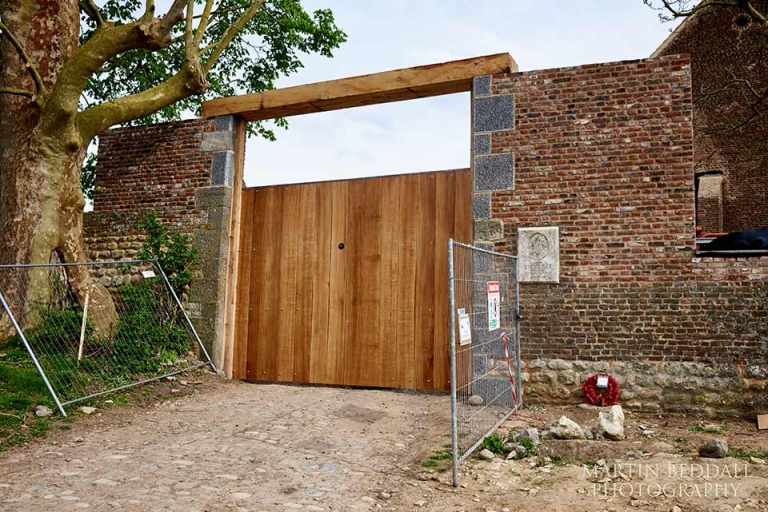