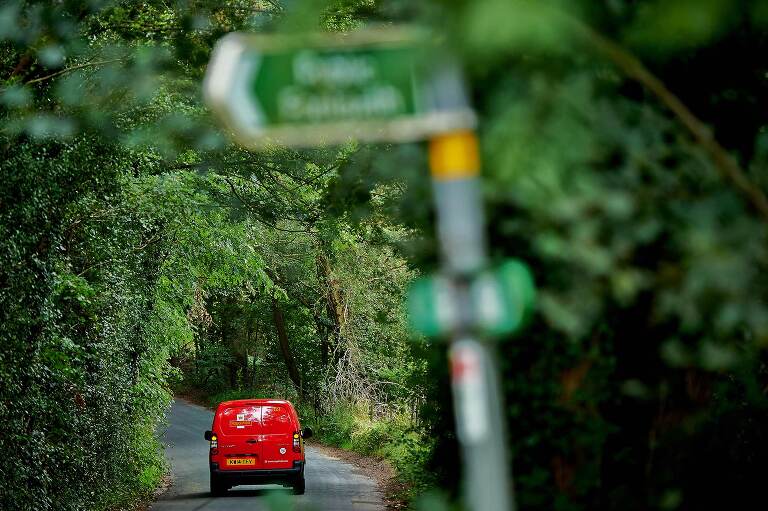 Shot over four days, at locations such as the giant Heathrow Worldwide Distribution Centre – one of the most automated postal centres in Europe, the site covers 100,000 square metres (25 acres). Also the famous Mount Pleasant Mail Centre in Islington, London. This was once one of the largest sorting offices in the world, as well as various locations in London and Kent, following postal rounds. From a very urban landscape in central London to quiet country lanes in Kent.

The brief was for ‘natural’ imagery.

Rather than heavily stylized and abstract ‘brand’ type shots. Using just the ambient light at all the locations, the idea was to keep it looking real. A photo-journalistic approach that reflects my own photographic background. Even the people in the shots were Royal Mail staff, rather than models. The brief was also sure about what they didn’t need. So no blurry shots of parcels whizzing along the conveyor belts – this they already had plenty of in their image library.

Most images were composed at the moment, rather than pre-planned, retaining an authentic reportage approach, within the boundaries of the brief. It was a question of making the best from an environment and the light. The idea was not to add lighting to a scene but to keep an ‘authentic’ reportage look to the images. We had a shoot list but the brief was flexible enough to allow alternative compositions and locations become part of the shoot, once we were on site. Often it was a case of letting the member of staff do what they do and then shoot around this.

The resulting images – over 1500 from these shoots – were to form part of a corporate image library for both internal use and external marketing. Below are just some of the images from this corporate reportage photography shoot,