Brief shoot on a staircase

Quick follow up on my last blog post about the use of my images of Deputy Prime Minister, Nick Clegg in the Independent on Sunday, I thought I’d add some more images from that brief shoot. The brief was to shoot a portrait of Clegg – avoiding the ‘tight and bright’ – to accompany an exclusive interview he was giving the newspaper. This was to take place after he had given a speech at some offices in London, but the room for the interview was on the very small side – so I needed a better location – a stairwell next door. I have to say that Clegg’s media advisors were helpful – after several years having to deal on occasions with those around Blair, it was good to meet advisors willing to help and have some visual literacy. I was once ushered into a room at 10 Downing Street for a portrait of Tony Blair ( then the Prime minister ). As I unpacked my bag I was told I couldn’t take pictures there! That overcome, and paper and crayons not ordered instead, Blair’s advisors would then do their usual trick of attempting to thwart any interesting photograph – as they clutched their bottles of water, tried to look important and dream they were actually working in the “West Wing”.

These portrait sessions aren’t Vanity Fair shoots – they are over in minutes – with a budget that would not cover the sandwiches for such a shoot. No assistants, no fancy setups, no hours of prep…  Indeed it did begin with Clegg wondering why they needed another photograph of him at all – nice to see he encourages the employment of freelance photographers!! Then it was a constant reminder for him not to walk off after a few frames – got to get my moneys’ worth. I had set up a Profoto head with a fine grid to spotlight him on the staircase but favoured the natural light shots (Used a Canon 5dMKII and the 35/f1.4mm & 50/f1.2mm lenses) A few frames at the start of the interview, shot on the 85/f1.2mm, and job done. For me, my favourite shots are those in between the posed smiles and also nice to get a front page with my first shoot for a national newspaper for years. 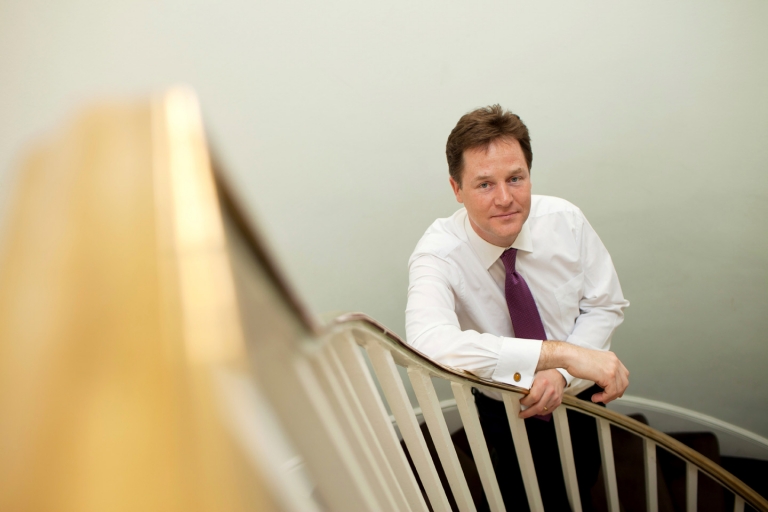 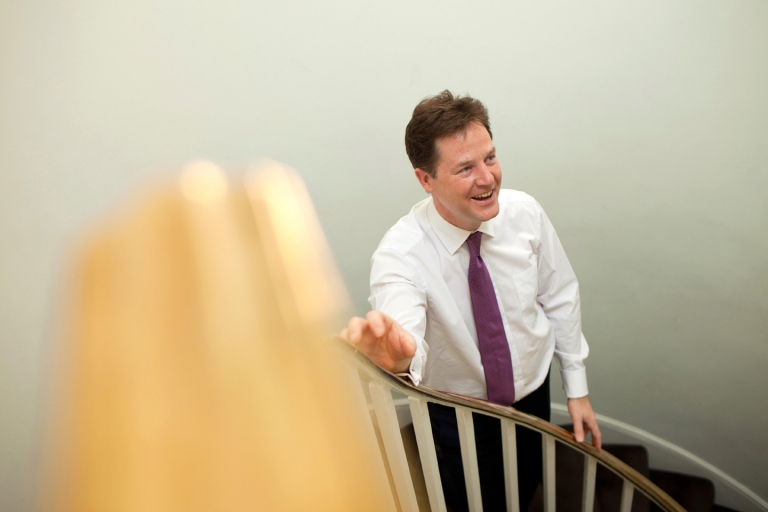 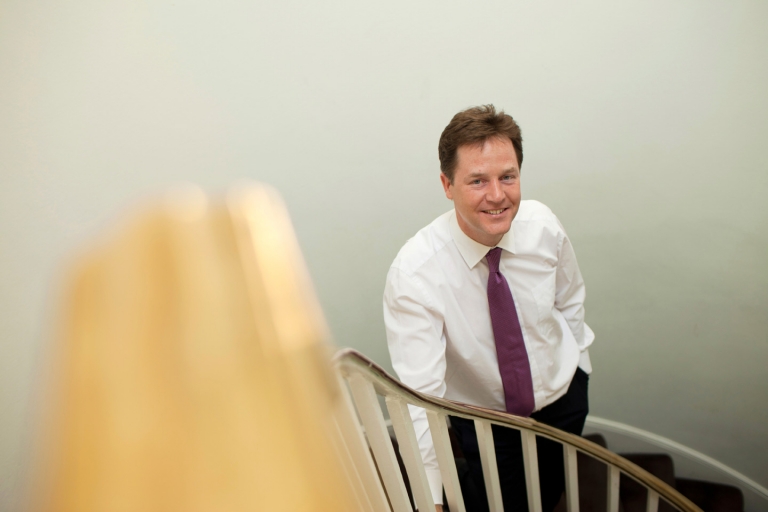 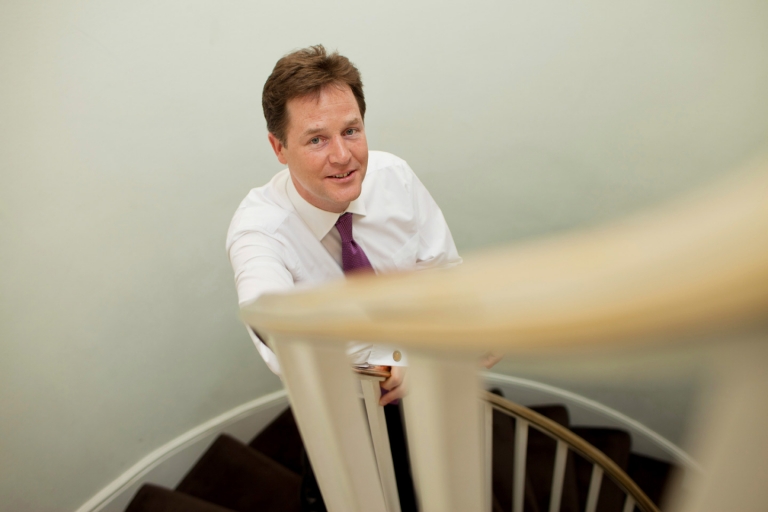 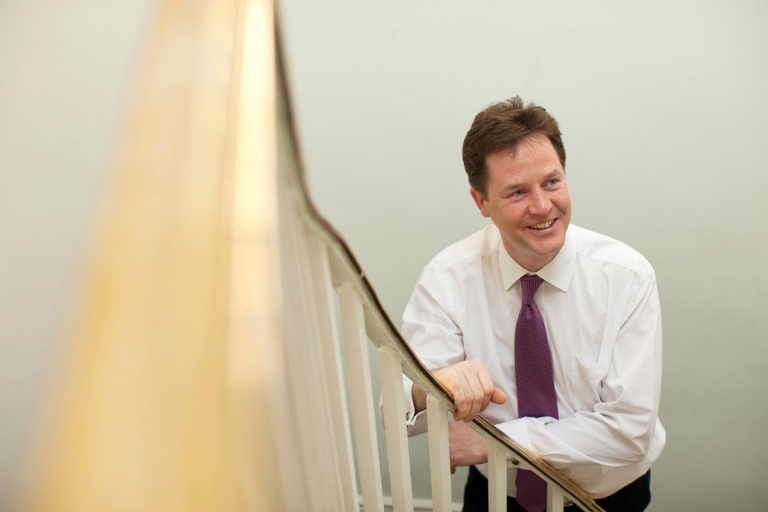 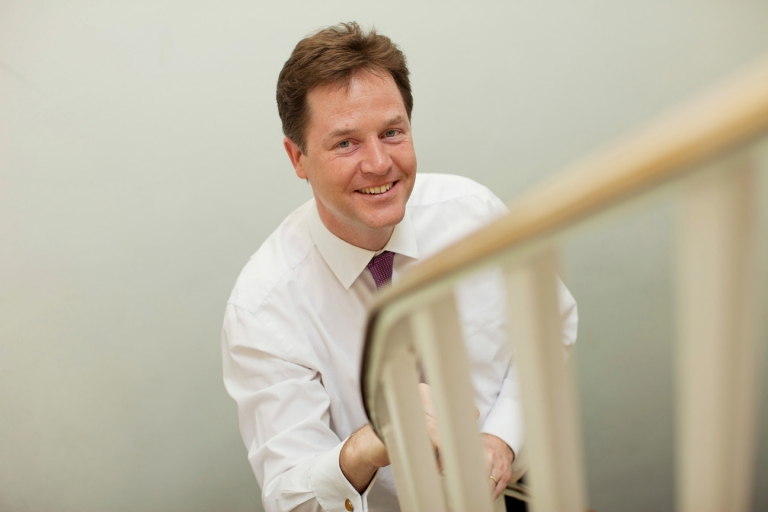 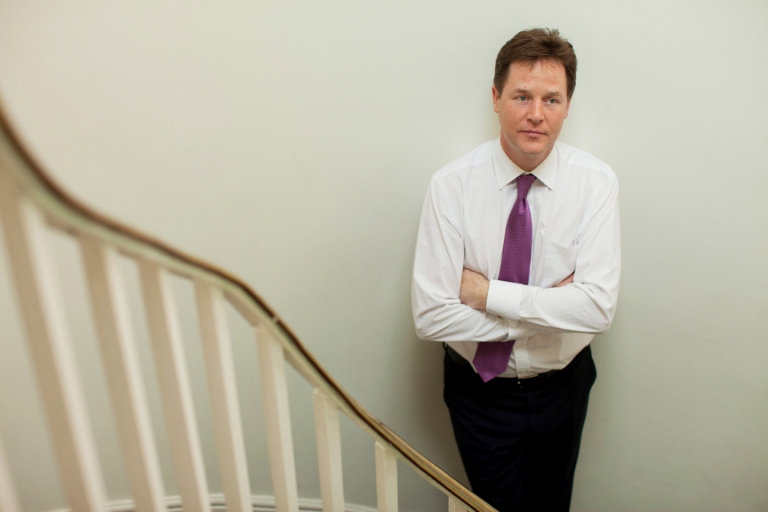 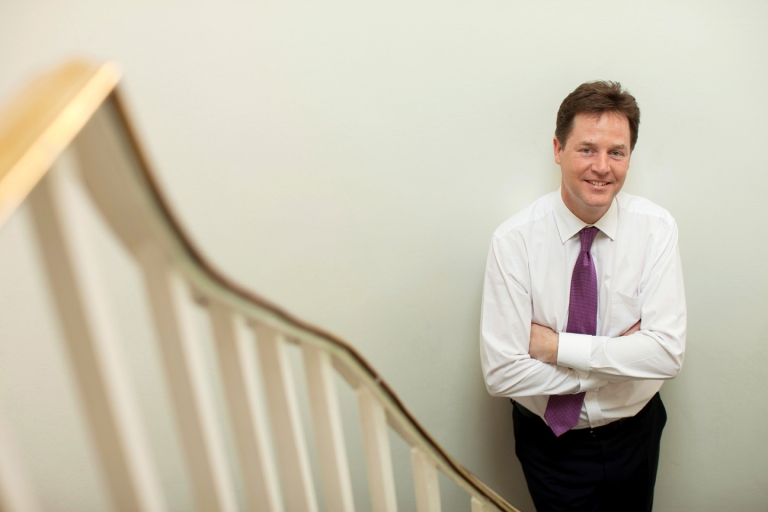 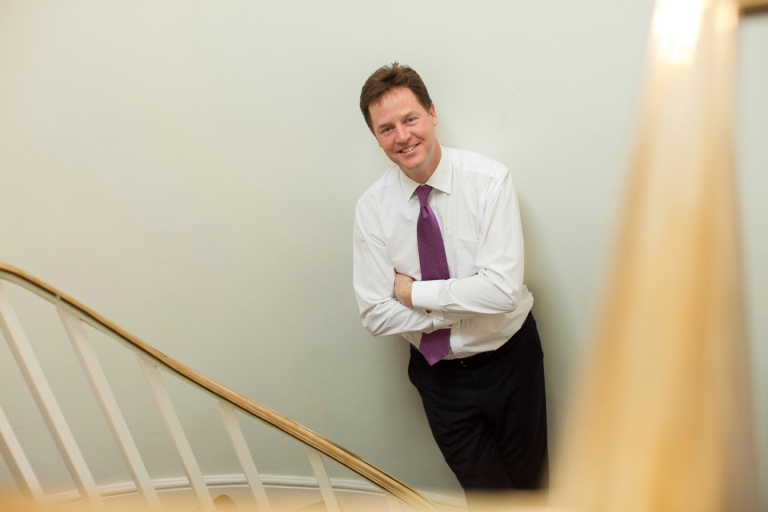 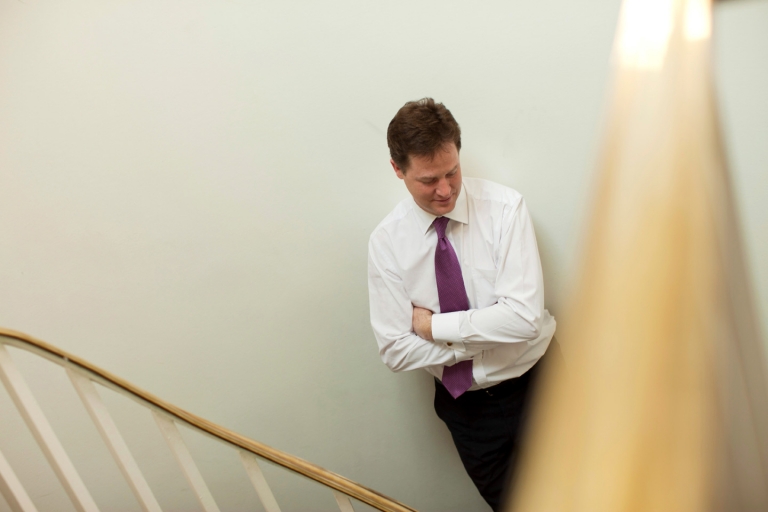 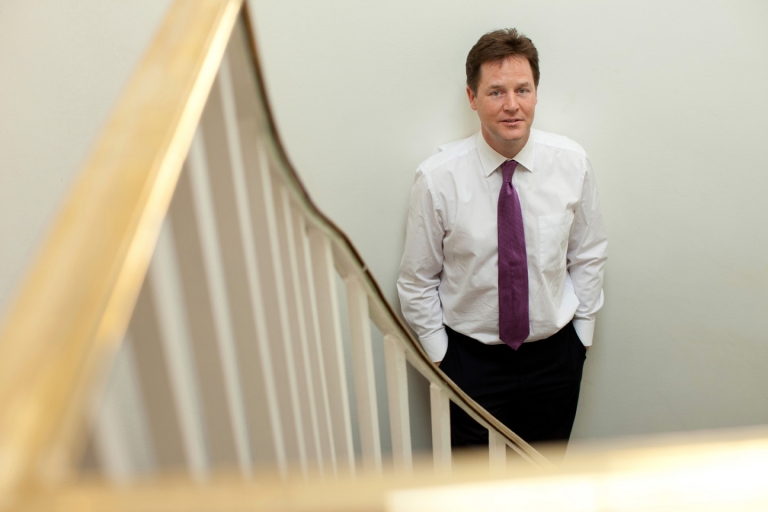 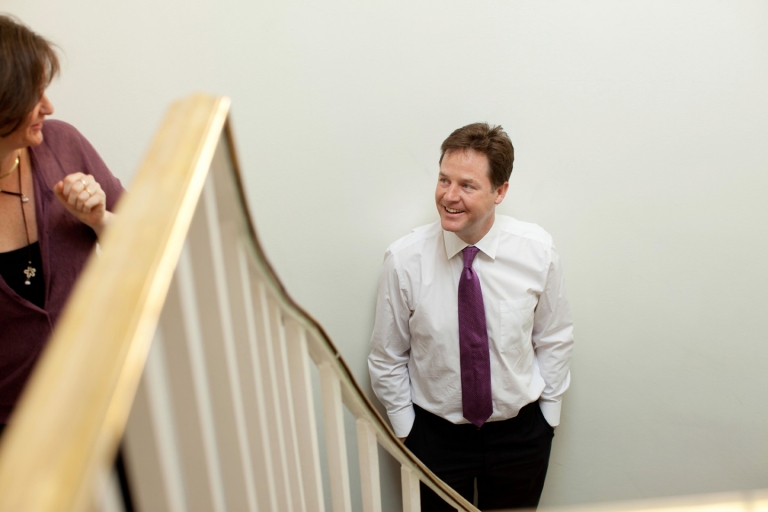 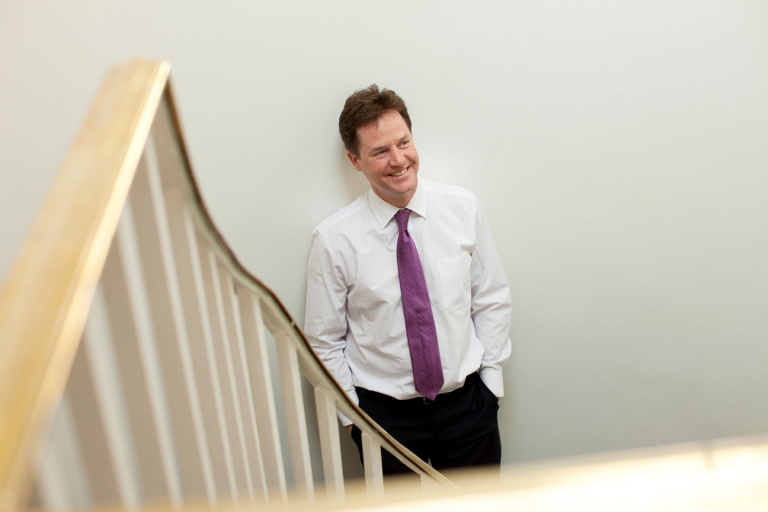 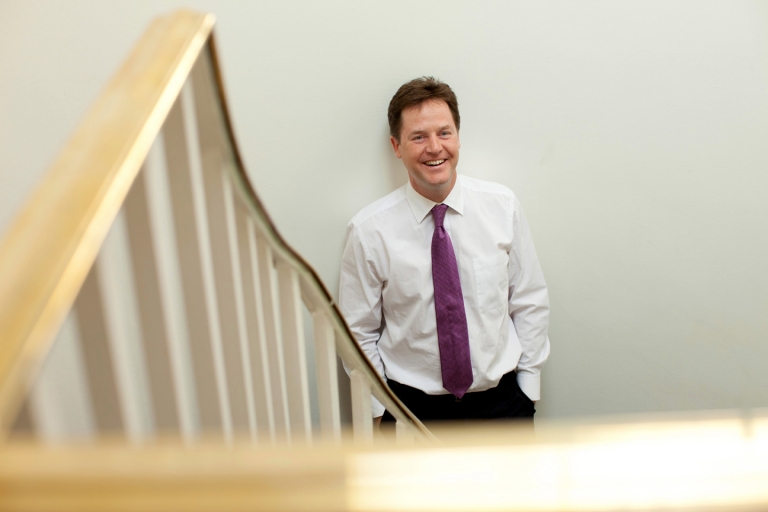 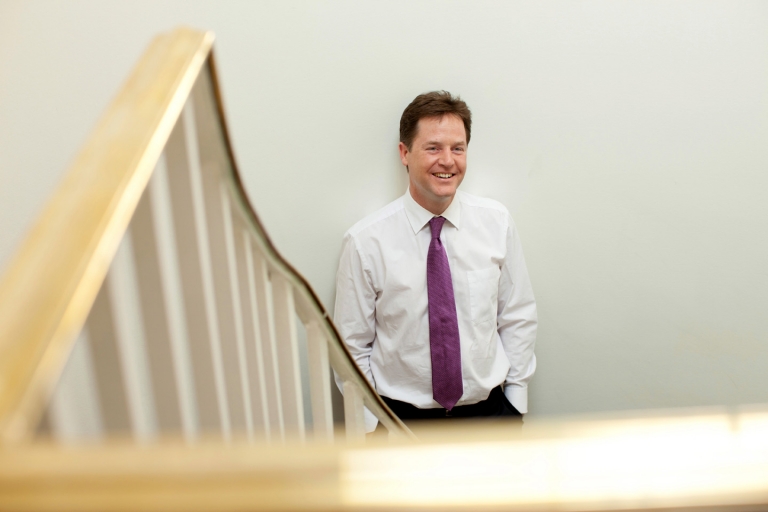 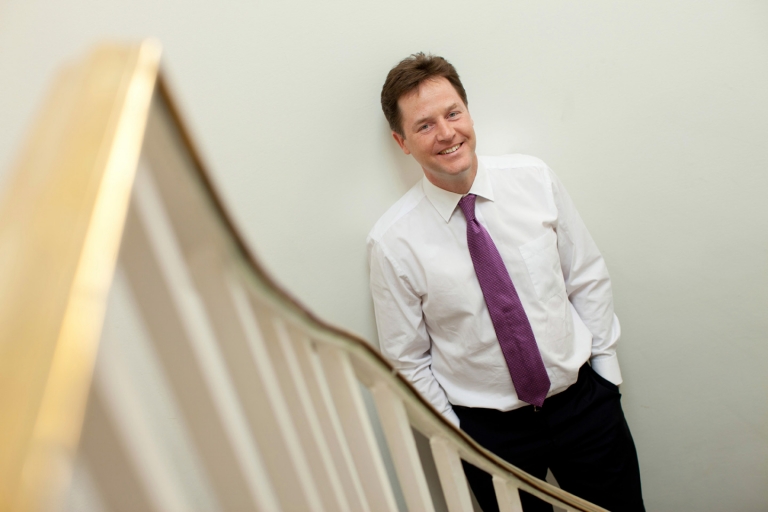