Hougoumont, Château de Hougoumont (or Goumont), a modest manor house and farm south of Brussels in Belgium, that will forever be a part of British military history. A strongpoint against the French forces at the Battle of Waterloo on June 18th 1815 – almost exactly two hundred years ago. It protected the right flank of the Anglo-Allied forces on that day. The battle began with the French attacking it but it was never taken – being held mainly by British Foot Guards. But at a point in the day it did almost fall to the French. The North Gate, which faced the Allied lines and so was open for ammunition resupplies and reinforcements, was attacked by the French. They tried to rush it as guardsmen ran in from outside. A Lieutenant Legros, (L’Enfonceur), forced his way in with an axe and 30 to 40 French infantrymen dashed into the courtyard. In the fierce hand-to-hand fighting, all the French soldiers were killed or wounded, except for a young drummer boy. The gates were slammed shut. The closing of this gate, against this onslaught, was described by the Allied Commander, the Duke of Wellington, as being instrumental to the outcome of the whole battle. 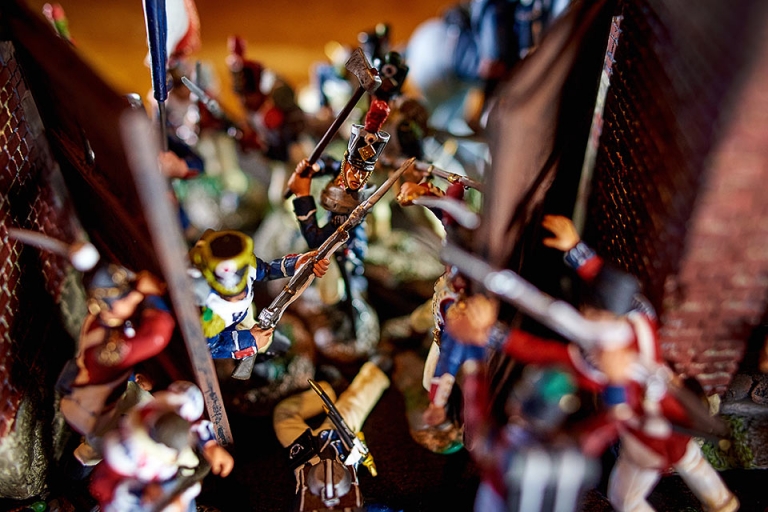 Plenty has been written about this battle within a battle and with the anniversary fast approaching even more books are set to appear. So no need to write a detailed history here but check out this first hand account of events at Hougoumont. But this really is a post about my own love of history. In particular for the ancient world and the Napoleonic era. I’m never happier than when I can combine my job as a photographer with this interest in the past. I’ve made many a detour as I head back from a unrelated shoot to check out an historical site. Recent years have seen me visit spectacular sites like the roman city of Leptis Magna in Libya and the mountain top city of Termessos in Turkey. I’ve been commissioned to photograph battlefields, crumbling castle ruins and evocative roman remains. For me my main interest in the Napoleonic era has always been the seemingly forgotten Peninsular War in Spain and Portugal, that preceded the more famous battle at Waterloo. The memoirs of Riflemen Harris and Costello, the letters of Private Wheeler for example. The drawings of Goya.

Waterloo is THE famous battle though and there are so many stories from those few hours, when over 150,000 men fought on farmland across the road to Brussels. For example how the Kings German Legion battled to hold the small farm in the centre of the battlefield with little ammunition. Brendan Simms’s book is a great read about this other battle within a battle. La Haye Sainte was probably more interesting to me than Hougoumont at first, as Airfix produced a model kit of this which I had when I was younger, along with hundreds of plastic toy soldiers. There was no Hougoumont model kit though. 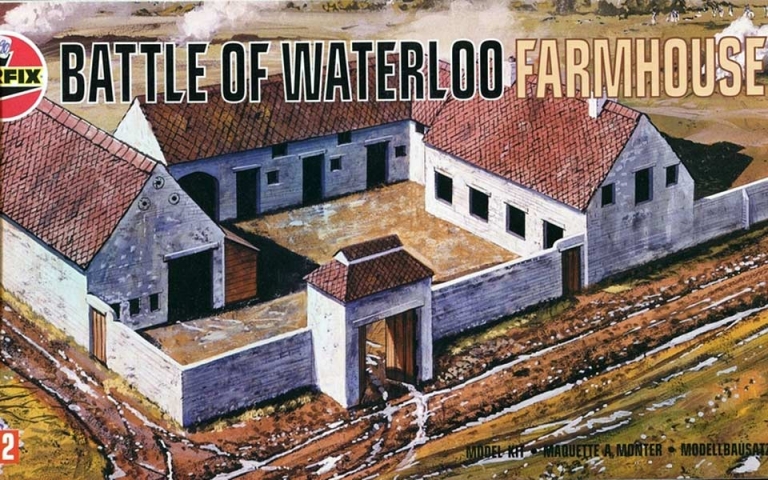 Nowadays the Xbox fills in for the imagination instead for kids and the Napoleonic era with it’s bright uniforms and lines of musket firing soldiers is often described as like ‘toy soldiers’. A classic image in films is a small boy fighting imaginary battles with lead soldiers (rather than Call of Duty on a screen). But this era was anything but ‘toyish’ – it was as dirty and nasty as modern warfare. As savage at close quarter as medieval warfare. Just read some of the first hand accounts.

About ten years ago or so, William Britain brought out a series of metal figures based upon the defence of Hougoumont. I’m not sure when they first made these, I get no replies to my emails from the company, now USA based I believe. But here is a page from their 2007 catalogue. The Closing the gates at Hougoumont collection 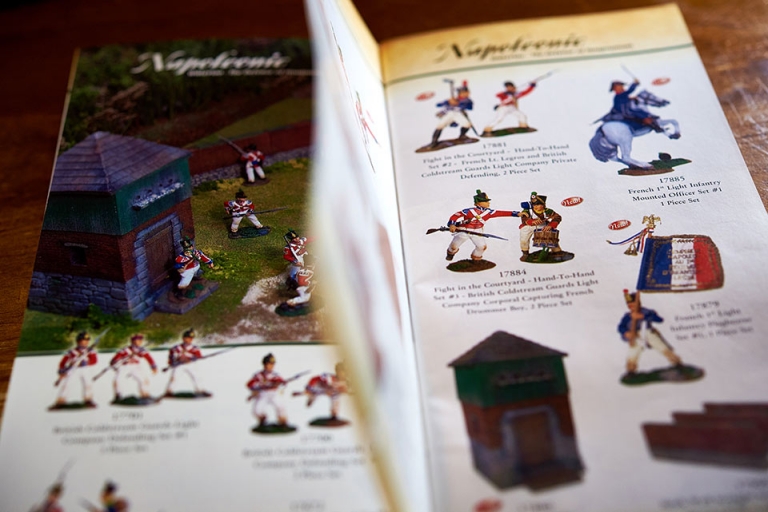 A few years ago, a late night ebay purchase found me in possession of the gate and about a dozen figures. Like many late night ebay auction victories, they then sat in the loft for years. But with the 200th anniversary of the battle approaching, maybe it was time to do something with them? Over the past year I have sourced other figures, on ebay, from model stores in the USA and Canada, etc. They have stopped producing this series and these are not toys. Many have certificates in their boxes showing they are one of only 500 limited edition sets made. You should see the way some auctions on ebay rocket for some of them. Clearly their design was based upon Robert Gibb’s painting of the North Gate closing, painted in 1903. (They don’t quite fit like this – unless you cut their bases off I guess? Although the gates look too wide for the opening in the painting? Artistic licence.) 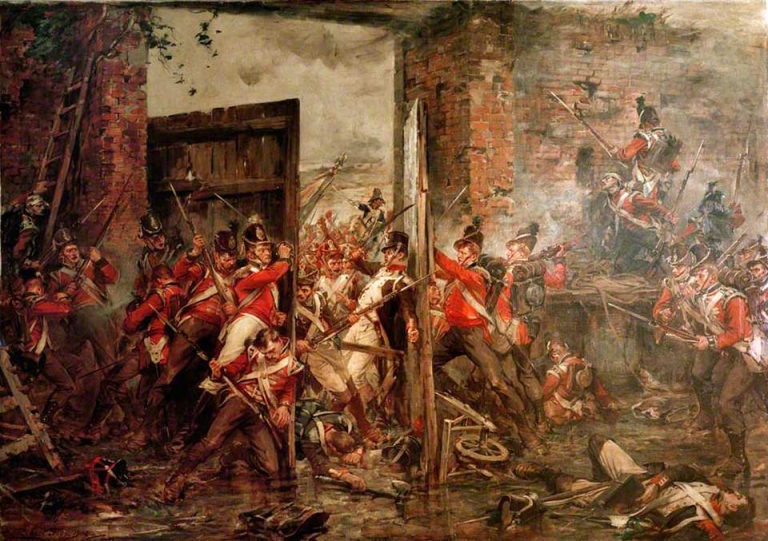 The painting now hangs in the National war Museum in Edinburgh castle. (In the castle forecourt/modern day car park is the tomb of one of Waterloo’s heroes, Sgt Ewart.) Painted eighty plus years after the event (Gibb was born in 1845) this isn’t a depiction by an eyewitness but an heroic treatment of an heroic event. I imagine it was more chaotic and desperate in real life, in that Hougoumont courtyard.

So with a custom made case and the figures all assembled on the kitchen table, my son, Adam, and I set about recreating a representation of our own. Of a pivotal moment in the battle and history. Like a Nativity figure set, it now sits on the bookshelf in my office, a homage to those defenders of Hougoumont! At the moment restoration work is taking place at the real Hougoumont, ahead of the anniversary, to finally honour what happened two hundred years ago.

There is also a link between the battle of Waterloo and model soldiers. In 1830 a Capt Siborne got the go ahead to create a large model of the battle. After an eight month survey of the battlefield and questioning surviving British officers, the model, built in Ireland, went on display in the Egyptian Hall, Piccadilly. Over 100,000 came to see it but Siborne didn’t cover his costs. The story about the model is well worth a read. There is also a more recent attempt at the Royal Green Jackets museum in Winchester. 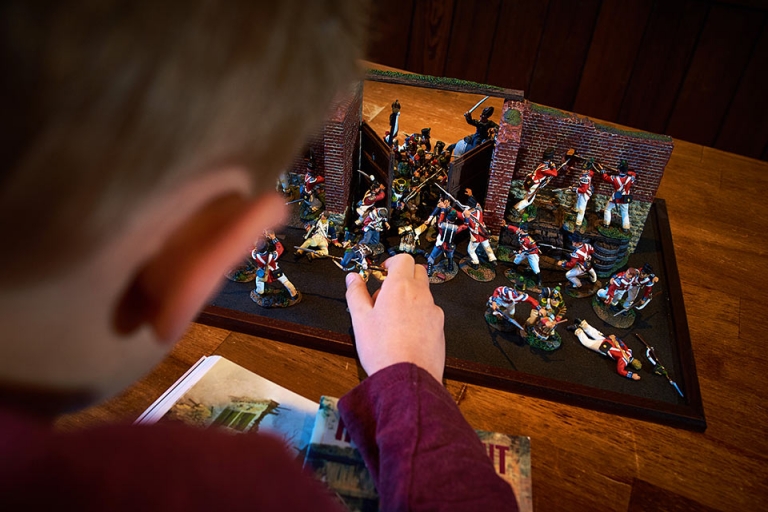 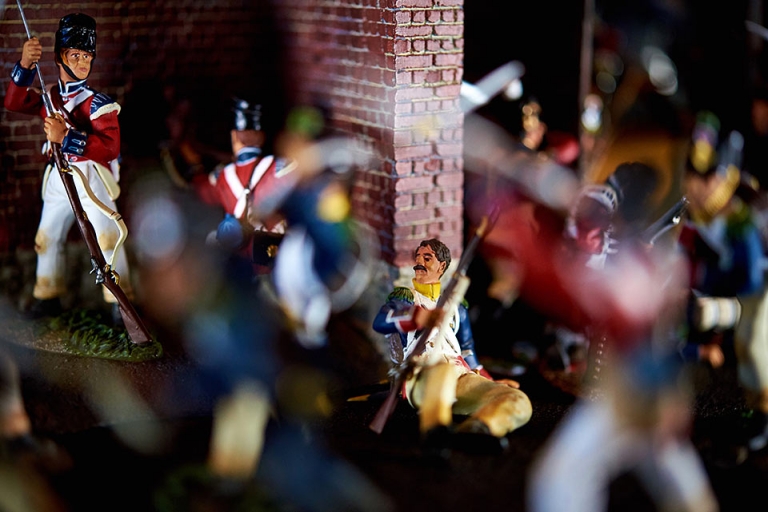 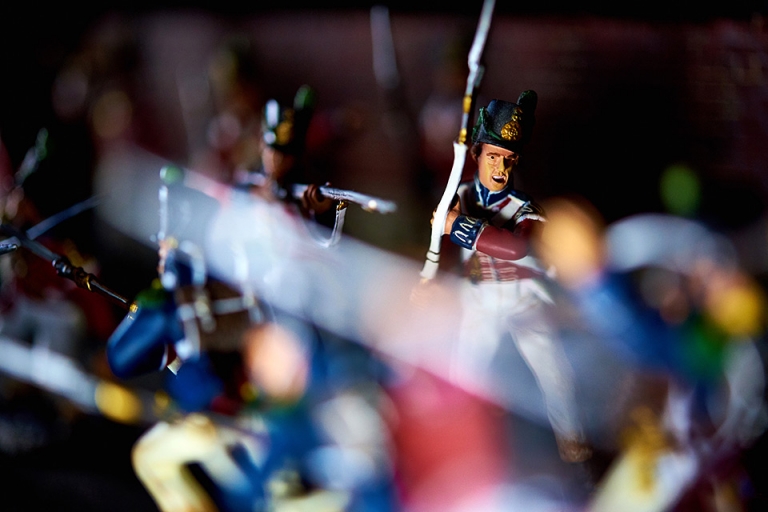 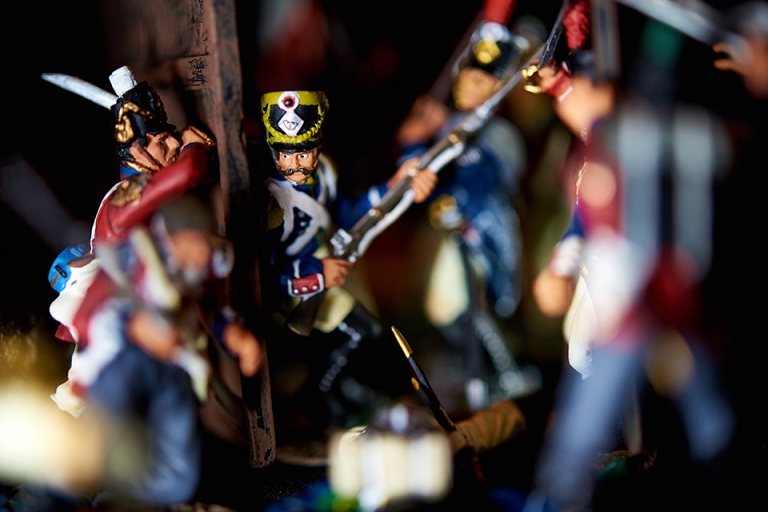 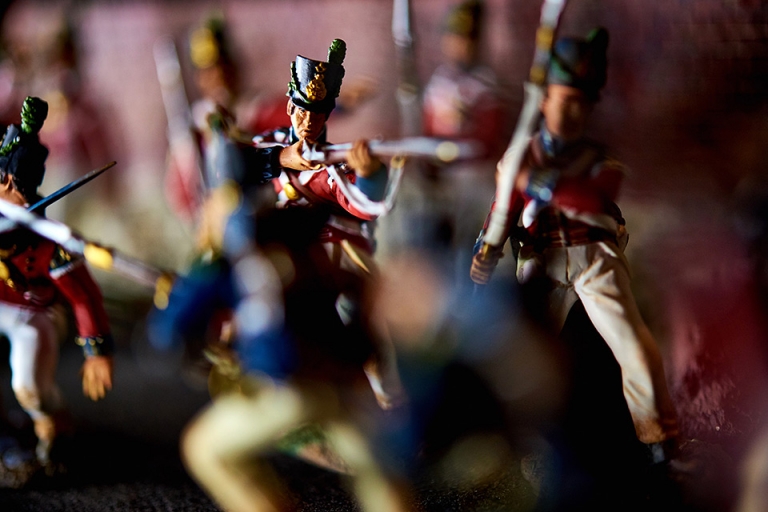 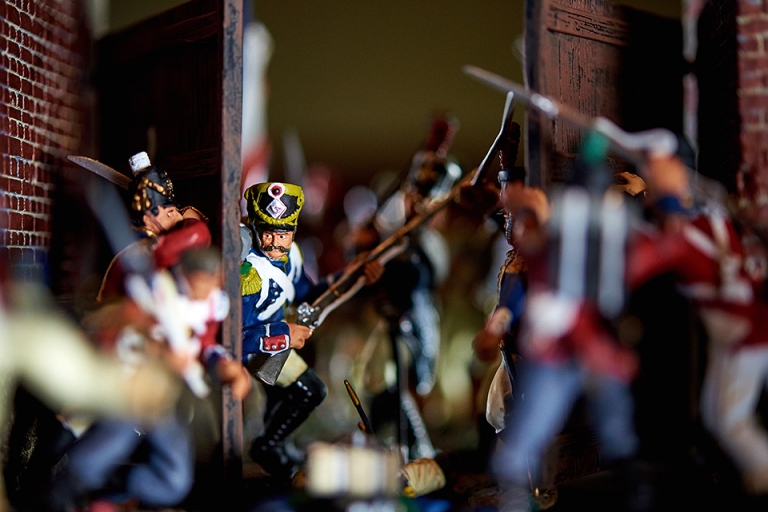 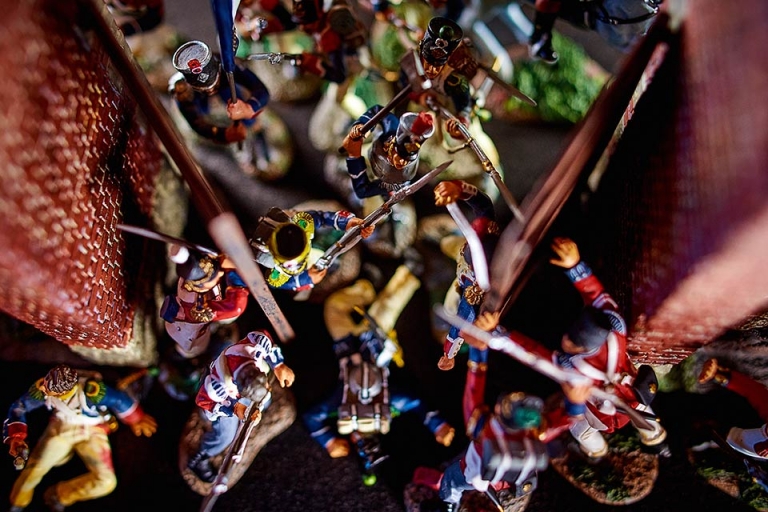 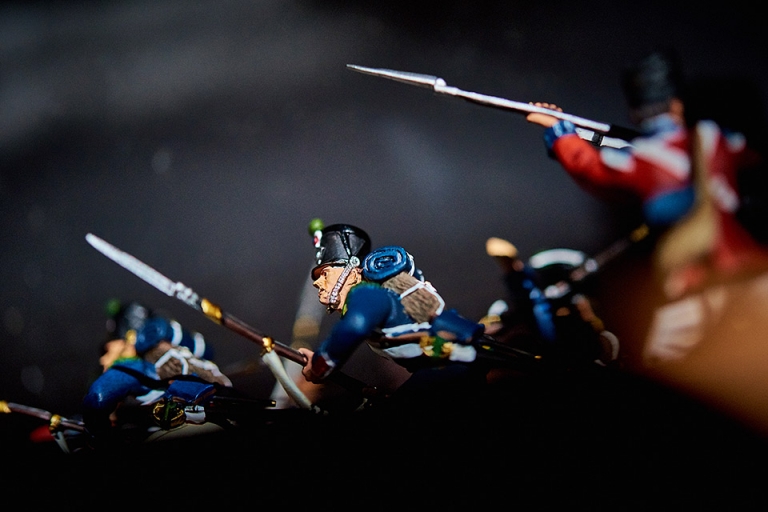 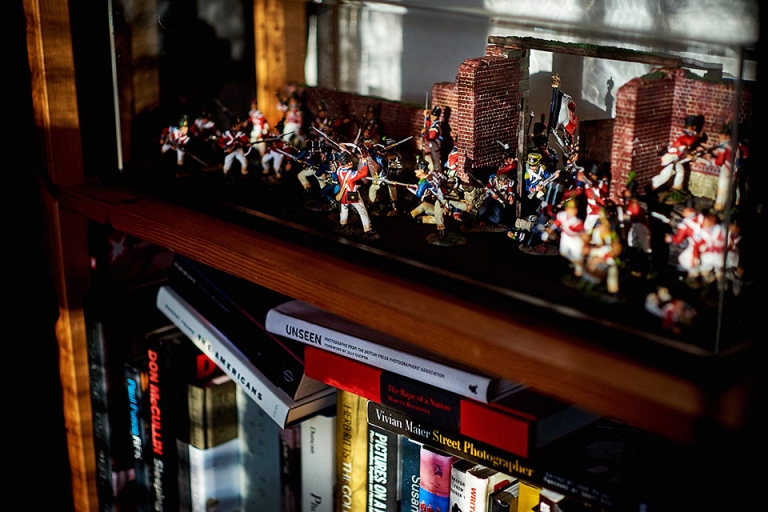 Hougoumont in my office, in the evening sunshine!